Well, I have finally ventured into the 600s.  This is a model I've had an eye out for just because it has some unique features.  Like most of the machines I've bought, I never wanted one badly enough to seek it out directly, or pay much for it.  But I found this one, with the cool mid-century cabinet I've been looking for, at a thrift store.   Couldn't pass that up! 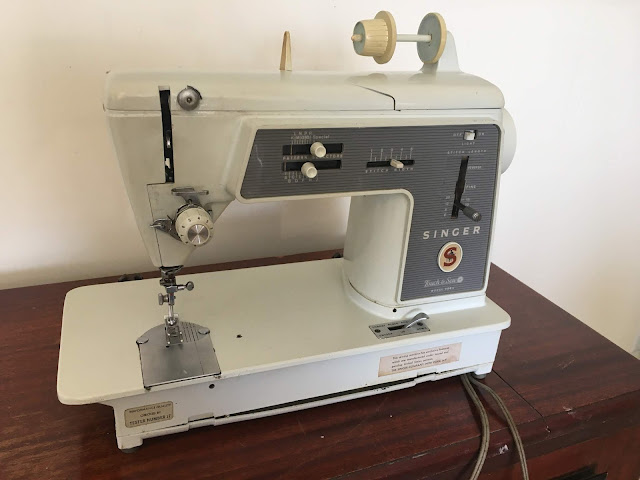 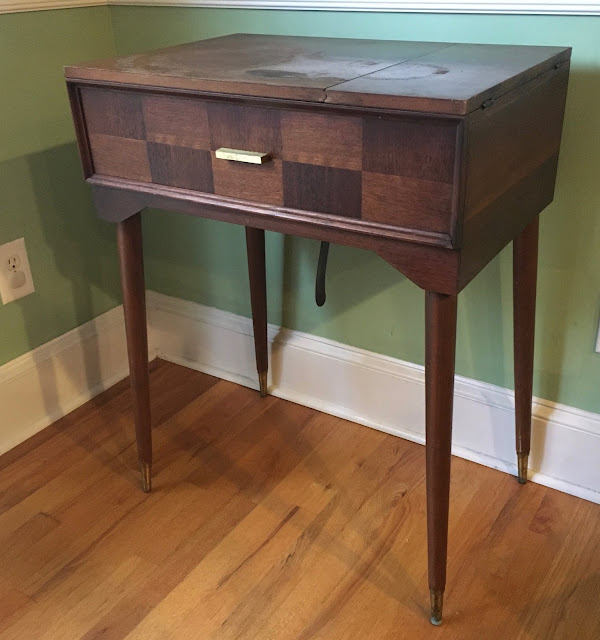 The table needs a little work, the top is rough, but I love this mid-century look

All the Touch & Sews are not created equal.  The earliest ones, the 600 for sure, have metal gears.  Some of the later 600s "might" have metal gears, and I'm not clear on exactly when the transition to nylon gears was complete but it was somewhere along this line.

If you're not sure, just take a look underneath. 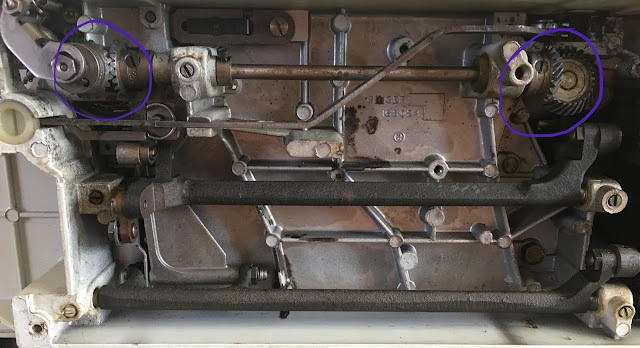 This is what you're looking for!  (There is also a top gear set, so you can use a screwdriver to remove the top cover and check those if it's easier.)

This early Touch & Sew is similar in many ways to the 401.  It has the same lifting throat plate (in fact they are interchangeable) and it has a similar stitch selection system except with levers rather than a dial.  If you're used to the 401, you'll be comfortable with this machine.  But there are two unique features that made me want to try the Touch & Sew: chainstitching and the wind-in-place bobbin.

This is pretty cool, and easy to do.  A caveat:  the bobbin must be empty when you wind it.  It unscrews into two parts so you can easily pop out the old thread rather than do the long, tedious unwind.  On the other hand, you don't have to worry about releasing the clutch on the hand wheel to wind your bobbin, you don't even have to take it out of the machine at all!

Then there is the chain stitching feature which I've been wanting to try.

Chain stitching on the Touch & Sew

Will I ever actually USE chain stitching?  I highly doubt it.  But I still wanted to give it a try just to say I can.  I could use it for fitting muslins (which I never even do, BTW!)  Or maybe it would come in handy for costuming when you want temporary fitting seams to accommodate various people.  It would be great for basting except that there are several steps you have to take to set the whole thing up so you'd only bother to do it for a big job.  Anyway, my little video shows how you do all that.