Well, I never particularly sought this machine, they always appeared to be complicated with weird dials and levers (although it's electric, this machine looks totally Steampunk!)  Someone gifted me one, however, so here she is.  This machine is quite the change of pace from anything I ever sewed with before.  Think of a cross between a 201-3 and a 15-90 (this one has a vertical rotary hook) and add zigzag, and this is what you get. 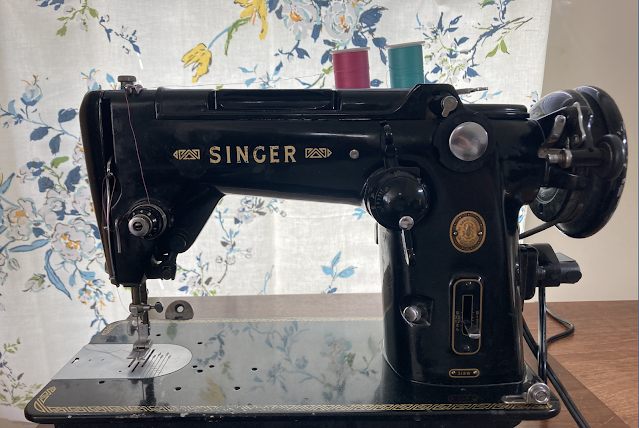 Singer 319w "Swing Needle" machine
The first thing you need to know about this class of machine (which includes the 206 and 306) is that they take a special needle size.  The common 15x1 that we use on most home sewing machines won't work on these because it is longer from the eye to the point and will actually cause damage if you try to use it.  This machine takes a 206x13 needle which is still available, but comes in limited sizes.*

This machine also takes an "L" bobbin which is the same diameter as a Class 15 but much shorter.
For its time, the 319k was fairly advanced.  It has a built-in camstack and also takes external discs (cams) for a wide variety of decorative stitches.  In addition, it has three needle positions - you can make 4-step buttonholes! - and can do twin needle stitching (more on that further down.) 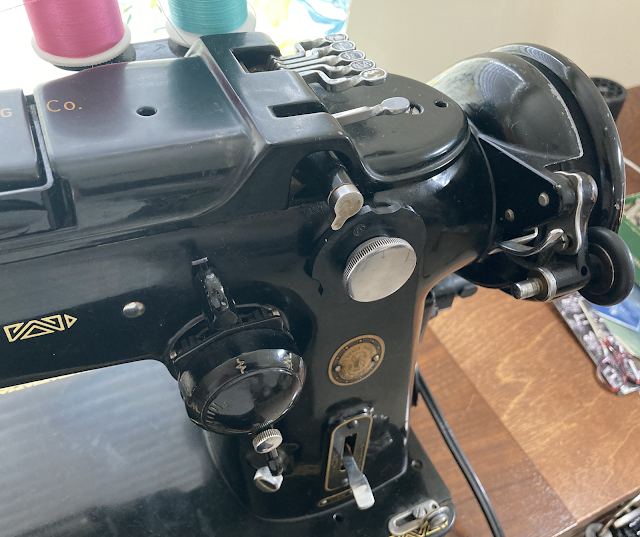 The typewriter looking keys at the top activate the built-in stitches.  The closest lever to the front activates the external cam.   The big round knob controls the bight (stitch width) and needle positions.
24 discs came with the machine originally (I only have 12 of them) and the ones marked A, B, C, D, E are already built into the 319 camstack.  These same discs also work on my 328k and 338. 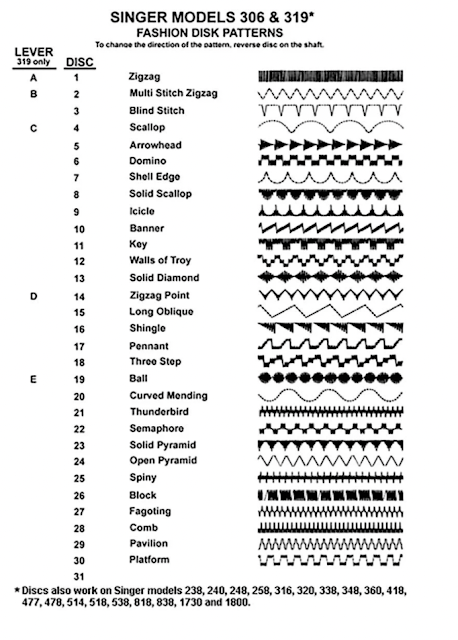 External discs are screwed right on the outside of the machine.
Inserting the bobbin case on this machine is simply a horror - I'll just be honest - and this is from someone who grew up sewing on a 15-91 and who actually PREFERS a vertical bobbin.  But this one is difficult to access and involves tipping the machine back, then it latches on the right where you have to do it totally by feel because you can't see what you're doing.
SO...if you've come this far, and haven't ditched the whole idea of this machine based on the special needles, bobbins, and bobbin case, then let's move on to how it sews! 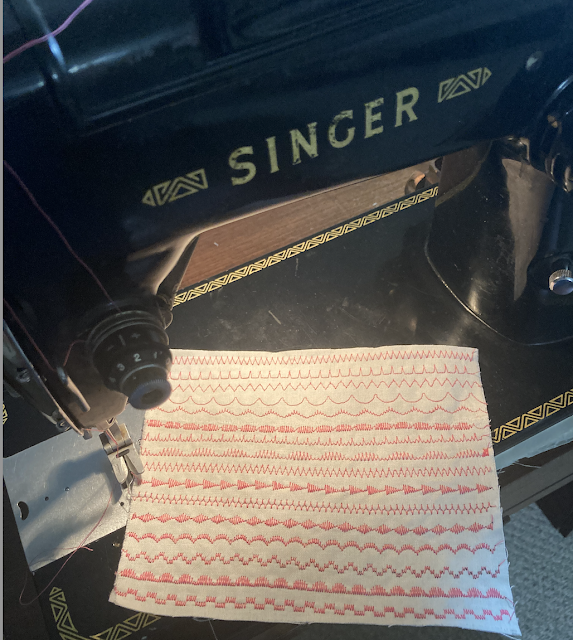 The top seven stitches are built-in to the machine (except the second one - the blind stitch - which takes a disc that you leave in the machine most of the time.)  The rest are decorative fashion discs.  Yes, it sews nicely.
And for straight stitching, this machine bangs out a solid 1200+ spm - not too shabby!
Now, for the twin needle stitching.  Remember, you need a special needle for this machine, so of course you need a special TWIN needle as well.  And these haven't been made by Singer since about the 1960s, I guess, which is to say they are expensive and hard to find.  But I do have one! 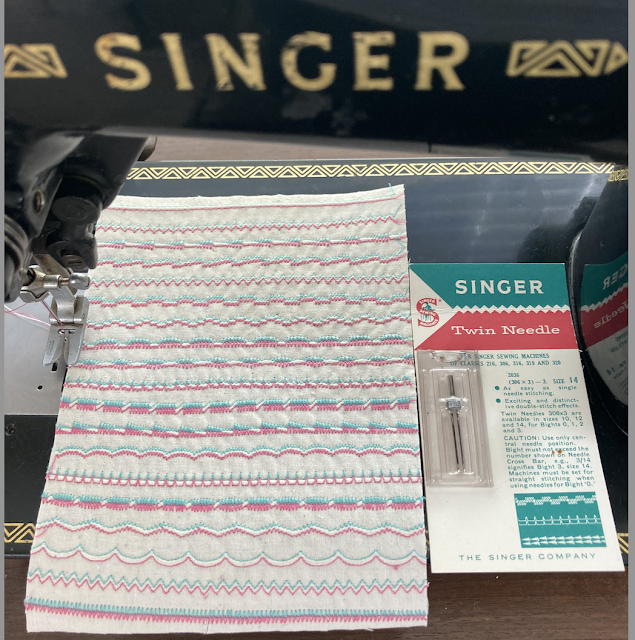 Twin needle stitching is limited to a maximum bight 3 (out of 5) depending on the needle.  Take care not to exceed bight 3 or you'll break your EXPENSIVE and RARE twin needle!
And I'll be honest again, and say that while it is cool that I can do twin stitching on this machine, I will never actually do it in "real life."  I have other machines that do it with a minimum of fuss, and use commonly available twin needles.  I can sew without worrying about dulling or damaging a $25 needle.
I had to retime the hook on this machine twice already and used the tutorial found HERE  (I don't know who this blogger is, but thank you for your help!)

It also has a really weird feed belt that is made of fiber with some big metal cogs - the Steampunk vibe again.

And, there you have it. Kind of an oddball Singer - ahead of its time, maybe, but a little less than user friendly because of the unusual controls, harder-to-find needles, bobbins, and belt, plus its finicky timing issues.

*(NOTE: There is a work around for the special needle requirement which involves modified timing and a different bobbin case.  I don't go into that here, but just want to mention that it's a thing.)